Heard a bit of discussion in the cartomantic world lately: 1)  What good are daily draws? and 2) What good are two cards together, as opposed to three? If you’re not card-crazed, it sounds like minutiae, I agree. But as sometimes happens with tiny, seemingly- loose threads, pulling on this one led to a tapestry of interlocking insights.

For anyone who doesn’t know, a daily draw is simply the practice of laying cards at the start of each day, to offer prediction, advice, or commentary. I’ve said a bit about my recent, probably temporary, conversion to daily draws here. I began by laying three cards each morning. Lately I have been drawing just two, so I started to think about the difference. Well, thinking is not all that fruitful in this case–feeling seems a better compass.

Lots of folks just pull one card, for a variety of reasons. Personally, I believe the cards speak best when they are allowed to sculpt their thoughts in a more nuanced way. That means more than a single card. I hate it when I ask a question and get a monosyllabic answer, so why would I encourage the cards to act like a sulky teen? The interplay of cards is part of the charm, and the whole is definitely swirling around and between the parts. I want to join that dance.

I was–pun alert–drawn into the whole daily cards routine by the notion that it’s a good way to get serious about understanding your cards. Because I’m also of the opinion that one needs a question, lest one be a tongue-tied bumpkin before the oracle (“Hi, uh, can you tell me some wise stuff?”), I wanted a “daily” question that would serve. I started working with the Italian Sibilla using the straightforward “What will happen today?” Thanks to my dear cartomantic friend Veronica Chamberlain, more recently I’ve been using this: “What is my truth today?” That’s what I’ve applied to my two-card draws with the Tarot de Marseille and my latest fling, L’Oracle de la Triade.

Notice the difference in the two questions. “What will happen today?” asks for external specificity, though some “happenings” do take place in my head. “What is my truth today?” asks for a theme to weave through the day, a clue to draw out threads of meaning. Those words “draw” and “thread”again! Drawing a thread of meaning out of an entangled universe.

As a comparative experiment, mine is obviously flawed, since I asked a more specific daily question of three cards, and a more open-ended one of two. Changing two variables at once is a no-no in the logical quest for truth. (Not to mention changing the deck–oy! So three variables.) Oops and oh well. Life is short and it’s a package deal sometimes.

The numbers in question, the Two and the Three, each have a life of their own, as numerologists have pondered for millenia. Even numbers have a kind of pat completeness, a self-sufficiency, with two being the most tightly bound. (“Haven’t heard from Charley in weeks!” “Oh, he’s probably in love again.”) Odd numbers seem to have a dynamism–the odd man out, something new arising. (One is an odd number as well, but partakes of both self-sufficiency and dynamic potential.)

I got the sense that two cards set a tone, show a lens through which I could fruitfully view the day. Maybe a bit of advice on the optimal attitude, or what to look for in the day’s upcoming situations. Whereas three cards–they go someplace. They want to tell you something. To use a well-worn analogy, if cards can be read like a sentence, three will do it–noun, verb, object (or adverb, etc). Two cards, in this analogy, are like a sentence fragment, tantalizingly incomplete.

You could read three cards this way.

Now remove a card/word. You can have “You go”, “go here”, or the rather enigmatic “You here.”

Or: Take this sentence. No, I mean take it as the example. It’s a different grammatical structure: verb-adjective-noun. Remove one word and you get “Take this” (what?); or “this sentence” (what about it?); or “Take sentence” (hmmm?).

These fragments are strikingly similar to dream fragments. I know there are many people who remember the intricate details of their long, saga-like dreams. I’m not one of them. I’ve always been lucky just to remember a single enigmatic image. Some years ago, a marvelous book called The Natural Artistry of Dreams cheered me by validating the richness of single dream images, thus encouraging my exploration of these personal, nightly-delivered talismans. And so with the message fragment of two cards.

Not that the message can’t be mundane. Here are some two-card draws with the Tarot de Marseille, from successive days. I had begun, and then continued, a big organizing/purging project. After psyching myself up for this dreaded task, I was determined to triumph: 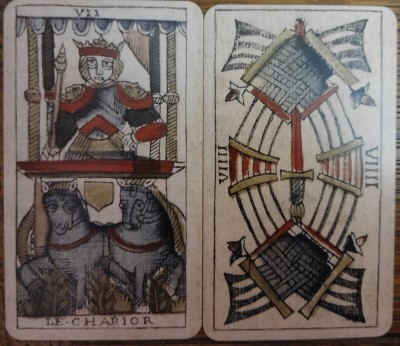 Day 1: I will conquer the dreaded piles of stuff! 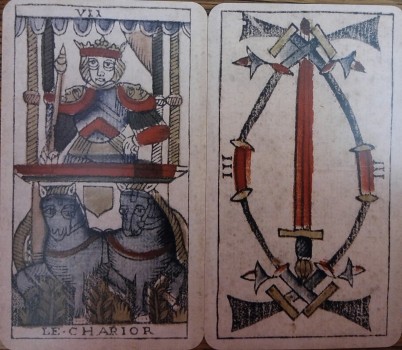 Day 2: Not done, but got rid of a lot–there’s some room to breathe now.

A nice reflection of my reality, a play-by-play narrative. And it was sweet of the Tarot to notice that I did make a lot of progress on day one. The piles were significantly reduced–and the house more spacious–by day two.

A draw from L’Oracle de la Triade, on a day straddling new moon and summer solstice, showed the return of a lovely joining of silver and gold circles: 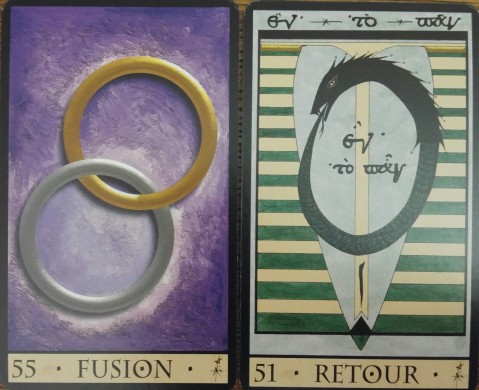 The message was not only on a cosmic scale. That day I ran into an dear friend and we renewed our friendship. The wheel had turned so much since we’d last spoken–a parent’s death, a son’s divorce, a sister’s cancer. As we hugged goodbye, her parting words were “Life goes on.”

So what about my three-card draws? True, I’ve skewed the experiment by choosing three cards to answer the more specific query. On the other hand, the chatty Italian Sibilla has trouble spitting it out in a few cards, what with all the nuances of despair, sneakiness, and other florid situations it so loves to describe in great detail. I used three cards for those daily draws and found they often gave a flavor of a daily event. Here’s an example: 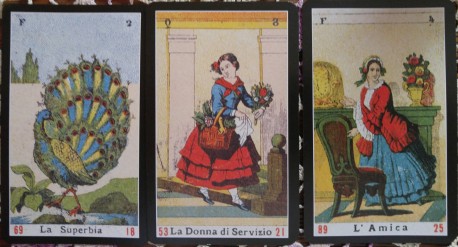 The “magic” card. Improvements and luck due to a friend.

The day of this draw, I uploaded a blog post. I was not expecting it to get many views since it was on a little-known topic. To my surprise, some friends shared it and it wound up as a relatively popular post. “Magic.”

So…why not just ask the cards which is better, two or three? But–the irony!–how many cards to lay for an answer? I tried something altogether different to “settle” the question. I generated a 2 or a 3, 20 different times, using a truly random number generator, and tallied the times I got each value. [Technical aside for number geeks: If a computer algorithm for generating random numbers has a fixed starting “seed” number, then the sequence, however randomly it evolves, will not be truly random. This site generates its starting value randomly–so it generates a truly random sequence every time.]

I could have just flipped a coin–heads for 2, tails for 3–but I was going for pseudo-techno-sophistication here! But, since the law of equal probabilities only holds for an infinite number of trials (a flipped coin could land heads 20 times, just very rarely), this wasn’t really conclusive. For what it’s worth, the 3’s edged out 2’s: 11 hits for 3, 9 hits for 2. Three is a bit preferable to two.

Of course, this is just silly. It may be illogical, mysterious, or unknowable, but the “rightness” of one way over another is not random.

Today I decided to lay three cards from L’Oracle de la Triade instead of my habitual two. 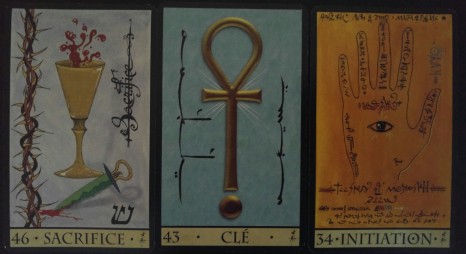 The message seemed clear. Sacrifice is the Key to Initiation. I could read this on the most esoteric of spiritual levels, or more mundanely: If I want to initiate action (the work of hands and eyes) on my various projects, I need to sacrifice my comfort and inertia. Less wine, more steely resolve is key!

Had I laid only the two cards, the message would have been Sacrifice-Key. Sacrifice is Key–leaving me to ponder the particulars of what and how. But it could just as well be “Sacrifice the Key”–a whole different line of inquiry, wherein I willingly give up an imagined or out-of-date answer. Now that I think about it, I could extend that meaning my three-card draw: Sacrifice the Key to Initiation. Sounds like the act of a boddisatva. That’s a lot for a daily draw to ask of me.

Rightly or wrongly, three cards led me to an answer I could grasp and even use. Two cards turn that answer on its head. Answers are dangerously limiting, but maneuvering in the daily world is difficult without a few of them, however lightly and temporarily held.

So in the end, which is “better”–two cards or three? How could there be an answer, any more than the ultimate truth of how much sugar to put in your tea? Not that we don’t argue endlessly about such vital issues, of course! The best guide is experience and a bit of intuition. What combination of spread and deck and question goes best together, right now?  I’ve had a summer of laziness and sorrow, reflection and experimentation; two cards from L’Oracle de la Triade have spoken to me each day. As I start to shift back to linear time, adding a third card seems…right.

But I’m just feeling my way, trying to be sensitive to the ever-changing forces.