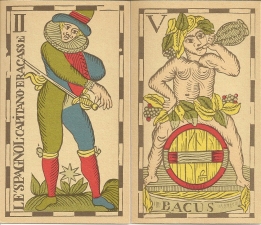 The Spanish Captain and Bacchus, from the Vandenborre Tarot

The Vandenborre Tarot (sometimes known as the Flemish Tarot) is a Tarot de Marseille variant. It’s quirky, so of course I gravitated to it. What’s craziest about this deck? La Papesse has been replaced by Le’Spagnol Capitano Fracasse (The Spanish Captain) while Le Pape is replaced by Bacchus, astride a wine barrel. There are some other differences in imagery from the more standard TdM decks, but those variations are shared with other decks such as the Vieville.  To me, these two cards really stand out as the unique features of the Vandenborre.

Historically, the reason for the changes in these two cards is that it was offensive to the Church to have the Pope in a Tarot deck (not sure why they objected to the Papess, since officially she should not have existed anyway). The social and psychological implications of replacing the Pope with Bacchus are mind-boggling to me, the stuff of another whole post or–perhaps better yet–a sitcom episode. And who is this Spanish Captain? The awesome Sherryl Smith describes his history on her beautiful site tarot-heritage.com (click here to go right to the full low-down on El Capitano). In short he’s a buffoonish swaggerer, an original laughing-stock character out of the Commedia dell’Arte. So replacing the Papess with the Spanish Captain is a bit like replacing her with (insert name of most ludicrous current political figure here).

Recently, the on-line card-reading community has been reminding itself (and rightly so) that, honestly, you can read with any deck and we all need to stop being snooty and rigid and judgmental. This discussion came just at a time when I’d been mulling over these Vandenborre trump substitutions. Worrying a bit, in fact. If the Tarot is a “complete”system, what happens when you remove core qualities/archetypes/functions and replace them with wildly different ones? Is the Vandenborre Tarot somehow incomplete? Can you address any question with it? What if you need to represent orthodox spiritual authority and you get…Bacchus?  Or the principle of deep, silent knowledge manifesting as an 18th century sleezeball? After all, these shifts didn’t happen gradually, due to the collective wisdom of the ages. Card-makers were forced to replace the offending images with others.  The changes, however intriguing, feel like amputations, with ill-fitting replacements, rather than organic developments. How’s that peg leg working out for ya?

While I was tormenting myself with these questions, it occurred to me that talking about someone, whether on-line or in the privacy of my own head, is rather rude, not to mention inefficient. So at last I realized the best person with whom to discuss my questions about the Vandenborre was the Vandenborre itself.

Are you able to answer all types of questions? 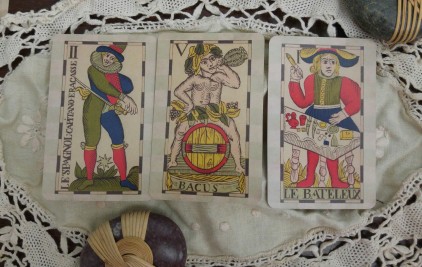 I had to laugh–there were my two friends the Spanish Captain and Bacchus. (I swear I shuffled the cards!) They knew it was them I was all worried about. With a street magician’s sleight of hand, these two cards had replaced their predecessors, and through the same magical actions, they will do just fine.

What unique insights do you have to give? 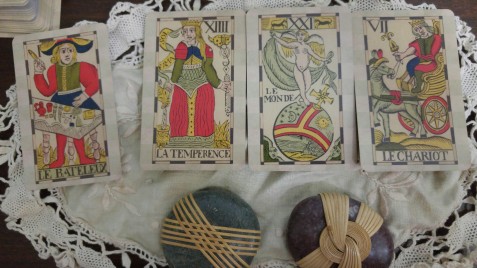 The initial three cards I pulled all look left (although the horse looks at his charioteer), so I pulled another card to see who/what they look at. The Bateleur reappears, looking back at them all. La Temperance has no wings; she looks like a milkmaid and the water she’s pouring obeys the usual laws of gravity–unlike in many other decks. She and the Bateleur regard each other with interest. She looks as if she’d like to go on a date with him, and they make a handsomely coordinated couple, both dressed in red with touches of green and blue. The Charioteer seems to be in conversation with his horse. So there are two relationships happening, one on either side of Le Monde. Le Monde has the wings Temperance lost; no mandorla surrounds him as he dances on a world, whirling his cloak. He looks vulnerable yet free.

To be honest, everyone here seems a lot more relaxed than in, say, the Noblet. It’s kind of refreshing. Relationships are happening; you could dance on top of the world. Maybe this deck’s unique gift is to remind me to lighten up. The angel of moderation can trade in her wings for a street magician; the successful man can get good tips from his talking horse.

How can I best work with you? 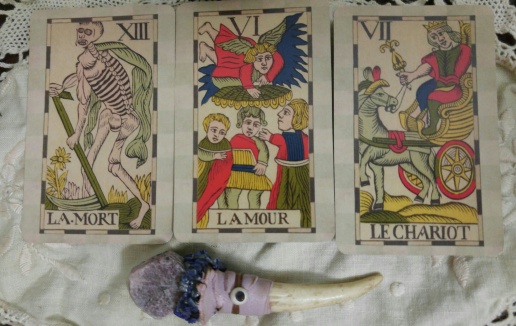 Cut the indecision. Move on.

Well that was blunt. Enough said. And so I shall. Thanks, Vandenborre, for setting my mind at ease. You’re a fun date, for sure.

5 thoughts on “Worrying About the Vandenborre”