This post is about a lot of things: my Polish grandfather, myself, and some way-cool cards–the pot at the end of a rainbow while searching for a bit of my heritage.

There’s no one to ask about my Polish grandfather. He died when I was 6 months old (so it’s safe to say I am not him, reincarnated). He’s a mystery to me–I don’t even have a name by which to call him. We called my grandmother “Busia,” but I never learned the Polish word for grandfather, since he wasn’t there to be called. I usually think of him as “mom’s father” or “my Polish grandfather.” His name was Jan.

Part of our family lore was how Jan insisted to my mother that I was special. She’d recount to me how he told her, “Don’t you see how special she is?” and she’d replied, “Yes, of course, I know how special she is.” But he’d persisted: “No, don’t you see? She’s really special.” And again she’d assured him that yes, of course she knew. Since this exchange occurred just a few months before his death, it always seemed to me to be extra momentous. And I grew up feeling a special feeling for this grandfather.

Jan was an immigrant and something of a heretic. He left behind a crystal ball and a small book on palm reading. He was a tailor who passed a sense of the meticulous to his daughter. It’s not clear that he had much formal education, but he was an auto-didact. He carried a small notebook in his pocket at all times; if he heard an English word he didn’t know, he’d write it down along with its definition, in order to better his command of the language. He had some esoteric way to get rid of cysts, which apparently plagued him at one time. Years later, when she too had cysts, Mom rued that she hadn’t listened to him try to explain to her how he did it.

Mom inherited Jan’s restless thirst for knowledge, both mainstream and occult, and in turn passed that along to her own children. So of course I dabbled in Tarot and astrology, and I read Jan’s cheap paperback on palm reading (it eventually fell apart). But somehow a few years ago I started to wonder about Jan’s card reading. He didn’t leave any cards behind; I figure if he had read Tarot I’d have probably seen a deck. I started to get interested in Lenormand cards, and then interested in their playing card inserts. Ordinary playing cards seemed the most likely choice for a poor immigrant. With playing cards, it might make sense that there was no special deck to be passed down.

In my quest to learn to card reading, with this deepening connection to Jan, I found several wonderful teachers. One of them is the incomparable card reader, teacher, and visionary, Camelia Elias. I absorbed her Taroflexions blog eagerly, and I’m happy that Camelia became a teacher and mentor of cartomancy for me.  Camelia generously offered to cast a horary chart on the question of what type of cards Jan read, and her conclusion was that he read many types of cards. Still, I wondered about the absence of a deck in the family.

Then I stumbled on an Ebay listing for an unusual 1940’s vintage, 36-card fortune-telling deck. What caught my eye was that the instructions were in English and in Polish! The deck includes cards like The Dancing Couple, The Shepherd, The Fairy, and The Bacchanalian (what’s not to love here?) along with Dog, Child, Heart, Coffin, and other “standard” Lenormand symbols.

Once I acquired the deck and saw that the maker, United Novelty Company, had an address of Chicago 22, Illinois, I realized that the “22” would have morphed into today’s zip code for the old Polish neighborhood, 60622 (now a trendy, gentrified area). So these cards were distributed by a company within walking distance of Jan’s home!

The cards are thin cardboard, similar to Mexican Loteria cards. Like Loteria, they were probably readily available in the neighborhood, at the grocery or drug store. Holding the cards, I felt something click into place. Surely the ever-curious Jan would have seen these, used them–and perhaps used them up, being as flimsy as they are. Not a deck that would be carefully treasured, since you could just buy another anywhere.

Now that I had these beautiful, albeit delicate cards, I wanted to use them, but I was reluctant to damage them. More good luck! Lauren Forestell, card restorer par excellence, decided to reproduce the deck. (For a very limited time, you can still get the reproduction here before she closes her shop). Now I could treasure the originals and read with the deck too.

I wanted a kind of big-picture look at my relationship with my grandfather. So I went for broke and laid out a Grand Tableau with my Polish cards. All the meanings (some near/far) are printed on the cards; some of what we now think of as standard meanings are a bit altered. After some internal debate, I decided that I was the Lady (not the special Child Jan had seen) and Jan was the Gentleman. Then I laid the cards in lines of 8, with 4 at the bottom.

First card–Skull–someone has died. Looks like I’m on the right track. The corners: Skull-Moon (an affectionate person has died) and Fingerpost-Eye (a man is watching over my choices). Jan still thinks I’m special and he’s watching.

I’m right under the Skull, at the far left of the tableau, ready to be influenced by this departed person. Jan is not far away–we are knighting each other, in fact. Our lines intersect at the Ship and the Dancing Couple. Tower-Ship above Gentleman sounds like my grandfather, taking a rejected boat ticket to America to make his fortune (his brother was supposed to go but chickened out at the last minute). The Ship is the long journey, in time as well as distance, that connects us with each other. And the Dancing Couple? Frivolous, reads the card meaning. Dancing with the cards, as Camelia would say, is a fun thing he and I share. The other cards between us are the Loving Couple and the faithful Dog.  Good feeling all around.

And who is Jan? Reading his line, it looks like he’s a bit of a ladies man, what with the Dancing Couple and Loving Couple to his left and the Beautiful Lady on his right. Things are spoiled, it seems, by an unpleasantly powerful woman, aka evil fairy godmother (Mice-Fairy-Snake). Hmm…Below him are Letter and Horseshoe–he is on top of his luck, maybe he’d have said he made it himself, taking that unwanted ticket (Letter) as he did. The Cross touches him. I don’t know what his sorrows were, though like many Slavic men he occasionally drowned them in alcohol.

And what of the message in the bottom row of four cards? I can’t help but notice that two unhappy cards are surrounded by two happy ones. Although…this is not the Scythe of Lenormand, but the Sheaf and Scythe, which carries the double meaning of “happiness in the countryside” alongside the more standard “danger” warning. Engaged in bitter arguments, and having forever left his small Polish town for the big American city, Jan likely took refuge in positive thinking (he was involved with some 1940’s style New Age groups that advocated such). It seems like the final message is: Surround your troubles with luck, hold them inside a larger container of abundance and grace.

A good piece of advice, grandfather. Thank you. Dziękuję. 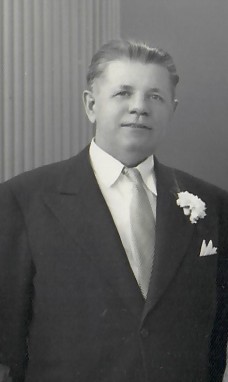 9 thoughts on “The Polish Cartomancer”